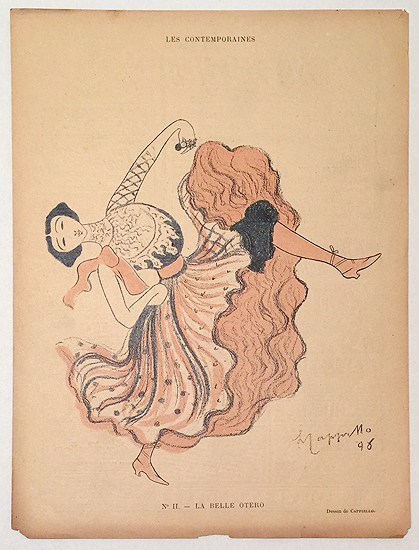 An original vintage page from the satirical weekly magazine "Le Rire", Printed in Paris c.1899. Showing a caricature of Spanish actress, dancer and courtesan, Carolina “La Belle” Otero. Fancying herself an Andalusian gypsy, she was pretty, confident, intelligent, with an attractive figure. It was once said of her that her extraordinarily dark black eyes were so captivating that they were "of such intensity that it was impossible not to be detained before them". She eventually wound up as the star of Folies Bèrgere productions in Paris. One of her most famous costumes featured her voluptuous bosom partially covered with glued-on precious gems... (wikipedia)